Home» News»PES Is Called eFootball and Is Now Completely Free to Play!

PES Is Called eFootball and Is Now Completely Free to Play!

Konami changed the name of Pro Evolution Soccer, one of the most famous football game series in the world, to eFootball, and this new nomenclature brought with it the game being completely free. eFootball will be released for PC, PS4, PS5, Xbox One and Xbox Series this fall, followed by mobile versions.

All versions of the game will have cross-platform support, but mobile players will have to use controllers to play with PC and console players.

eFootball stands out as a brand new, global brand developed for a global audience. This will avoid confusion about various versions of the game. Already last year, “eFootball PES 2021 SEASON UPDATE” was released instead of a new PES game, and since then, rumors of this new structure have begun. Konami confirmed all the rumors with today’s announcement.

eFootball™, a new brand identity for the next generation of consoles and gamers, will breathe new life into the game formerly known as Pro Evolution Soccer and Winning Eleven.

PES has been using Fox Engine for many years, including this year, while eFootball will now move on with a new Unreal Engine 4-based engine, which in itself is a huge innovation.

“Taking advantage of the power of Unreal® Engine, which allows us to drastically overhaul player responses, we have created a brand new football game engine that will support eFootball™;™ for many years to come,” said Seitaro Kimura, producer of the eFootball™™ series. We’ll share with you some details about the gameplay next month, so stay tuned,” he said.

Thanks to the almost evolved game engine, the animation system has been completely regenerated. The new technology, called “Motion Matching,”can be transformed into a series of real-time animations by selecting the most accurate of the various movements players make on the field. The system’s ability to provide four times more animation than before leads to extremely realistic movements. Motion Matching technology will be used on all eFootball™ platforms, including the latest generation of consoles, computers, and mobile devices.

Konami, which aims to share the pleasure ™ eFootball with everyone, underlined that this new football game will be free on consoles, PCs and mobile devices. More importantly, eFootball promises a fair and balanced experience for all players ™. More details about game mechanics and online modes will be announced in late August.

KONAMI stated that the game will only be released digitally and will be updated regularly with new content and game modes after its official release in the fall. Local matches featuring FC Barcelona, Juventus, FC Bayern, Manchester United and others will be available for free at the game’s release. In the future, certain game modes will be sold as optional DLC, giving players the freedom to create an experience that follows their own interests.

eFootball will first come out with 9 team options and a friendly match option. In the future, different game modes will be sold as optional DLC so players can only add parts of the game they want to play. The modes and monetaryization model in eFootball will be announced at a later date. Konami says the game will be “fair and balanced” for all players and says the transition to a free-to-play model will not affect this understanding.

Another information about the game will be that Peter Drury and Jim Beglin will continue to commentate on the match, as well as the much-loved Option Files feature (the mode that allows players to customize most of the game, including unlicensed teams).

Bringing football’s global gaming community together for the first time, eFootball™ delivers a realistic esports experience on consoles, PCs and mobile devices, as well as allowing players to play with each other regardless of platform with cross-game support coming after launch. Details about the mobile version ™ eFootball will also be shared at a later date.

To ensure open and transparent communication, KONAMI released the first roadmap for eFootball™ and provided the first details about both the launch contents and what will be added to the game in the following months: 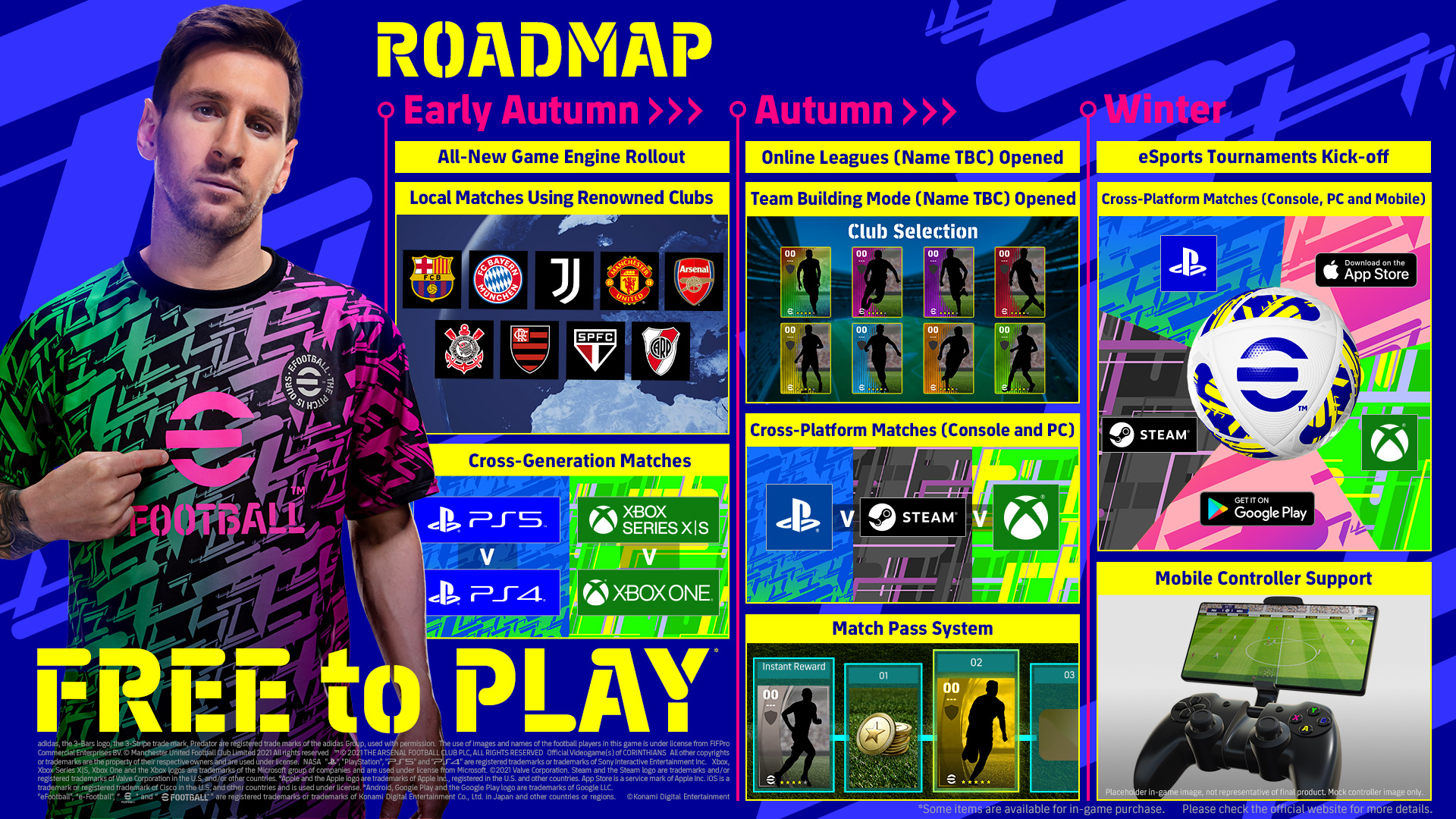 KONAMI is also the two greatest footballers of all time, Lionel Messi and Neymar Jr.; eFootball ™ be global brand faces. In addition, Andrés Iniesta and Gerard Piqué were closely involved in the development process as official advisors to the offensive and defensive mechanics of the game, respectively.

Guild Wars 2: End of Dragon to Be Introduced in Summer